If you have used compounded medications at any point over the past 40 years in the Portland area, you have probably met or spoken with Joe.   Joe is committed to patient care and working with his partners to operate Coastal Pharmacy & Wellness with the utmost integrity.  His sense of humor and genuine compassion are well known to patients and practitioners alike.

Working with Joe is just as fun as you might imagine – even though what we do is serious business, Joe is always making us laugh.  We thought we’d take some time to fill you in on some things you may not know about him.

Where did you grow up?

In South Portland as one of seven.  I have five brothers and a sister.  Do I have to tell you when I was born? [No.]

What prompted you to become a pharmacist?

I’ll give you the real story.  A friend from my neighborhood and I used to drive in to Cheverus High School together.  He told me he was going to go to pharmacy school, because “there are jobs everywhere.”  That made sense to me: you spend all that time and money attending school, it would be good to have a job when you’re done.  My older brother had friends who were graduating college and couldn’t find jobs.  So for me it was simply that it made sense, but as luck would have it, I can’t imagine doing anything else.  And to elaborate, I never worked in a pharmacy until I graduated, which is unusual.  Totally lucky.

Before that rational decision, what did you want to be when you grew up?

What has surprised you most about having your own business?

I didn’t realize, although people will tell you, that you marry the business. It’s with you all the time, 24-7.  So, that’s what I found out.

How has the compounding industry changed over the past five years?

How do you like to spend non-working hours (even though you’re “married to the business)?

Well, I like to be out there, thinking about the business… First, it’s family – hanging around with family is the best.  When we can all get together, it’s a good time.  For me, just for myself, exercise – particularly cycling.

What was your favorite toy as a kid?

(Laughs) Let me think about that: let’s go pogo stick.

What personality trait has gotten you into trouble?

Well, there just may have been times when I should have been more serious than I had been.

Which is your favorite Seinfeld episode?

The one with the pinkie toe (The Fire). Kramer rescues a woman’s pinkie toe, puts it in a Cracker Jack box and hijacks a bus to get it to the hospital. “I gotta toe here buddy, step on it!”  Then George tells him, “You’re Batman!”  This is also tied in with all the episodes in which George claims to have worked for Vandelay Industries. [Note: Joe is quite the Seinfeld aficionado, and he and I often bring Seinfeld episodes into our interactions.]

What’s the best piece of advice you’ve been given?

Don’t give up.  That was my mom, “Just don’t give up. It’s gonna be all right.  Just hang in there.”  You really don’t realize what your parents have to teach you until they’ve gone, and then you reflect.  Wish I’d talked to them a little bit more.

Joe started at Rosemont Pharmacy, where he eventually was trained as a compounding pharmacist. He went on to become one of the founding partners of Portland Professional Pharmacy and, years later, one of the founding partners of Apothecary by Design. He received full Fellowships from the International Academy of Compounding Pharmacists (IACP) and the American College of Apothecaries (ACA). He is also certified for specialty training in women’s healthcare by ACA. He received his degree in pharmacy at Massachusetts College of Pharmacy and graduated in 1979 with a BS in Pharmacy. 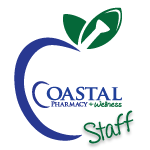